skip to main | skip to sidebar

It would not be far off the truth to say that the catalyst for Indian votes to sway from BN was the breaking of a Hindu temple in Kampung Jawa, Klang. Hindraf was a force to be reckoned with overnight. Anwar Ibrahim and Pakatan Rakyat embraced Hindraf with open arms. Anwar championed the temple issue. The Indians bought it. Our saviour, some thought. Humbug!

I have not read any news on thie demolition in the mainstream media. Malaysiakini covered the Kampung Jawa temple demolition extensively. Why the silence now? Humbug!

Hindraf has posted photos of the destruction on their website. But why the deafening silence? Where are the opposition Indian MPs who once boldly claimed that the MIC is not needed anymore to represent the Indian community since they now hold the louder Indian voice in parliament? Humbug!

I have always maintained that it is only a matter of time before the Indians realize that Anwar Ibrahim and his PR allies have taken the community for a ride. Anwar's sole ambition is to become Prime Minister. He will promise the world to all who will listen. To the Indians, he already has. Now his promises are showing cracks. Humbug! 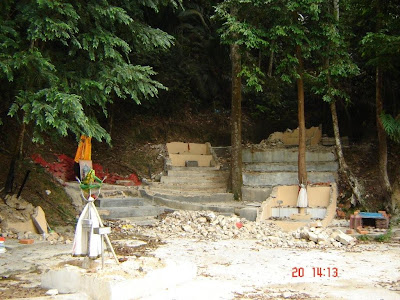 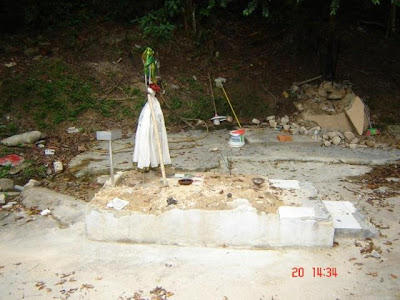 Posted by Premnath Agamutu at 11:42 am

I have said it before i will say it again. This will continue for a long time. I think this will happen as long as we have people who clearly are discriminatory.

The government no matter who takes over are still Malaysians. The people in Selangor administration are still the same old people except for the MP's and maybe some posts.

This will take a long time before we can all see each other equally. The damage has been done for decades now. Entire generations brain washed to have stereotypical views on other ethnicities. How can that be healthy?

You can even change the government but changing mindsets will be a more difficult and longer process. That is why we should never stop pressuring them.

You will need that shoe surgically removed from your mouth once Mr. Khalid demands an investigation into the matter and awards the temple a proper relocation!

I think its about time tht your party starts winning the Indians back,instead of pointing fingers at the opposition.Because even if P.R refuses to differ from you fellas, we might as well stick with 'em, i mean we gave you losers 50 yrs, so why not another 49+ for Pakatan?

Afterall, it makes no difference wht......

"MPAJ officers tore down temple despite state govt saying no

KLANG: The Ampang Jaya Municipal Council (MPAJ) officers involved in tearing down a Hindu temple in Ampang acted against a state government directive not to destroy places of worship.

Ronnie Liu, who is chairman of the state’s local government, study and research committee, said the state had issued a directive to all local councils to halt action against places of worship when it came into power but the officers defied the order.

He said that in taking the action last month the officers also bypassed the committee on non-Muslim affairs headed by state executive councillors Teresa Kok, Dr Xavier Jayakumar and himself.

“I contacted the council president a day after the incident and asked him to investigate the matter and identify those involved,” he said.

“I was told that he has submitted a preliminary report to my office but I have not read it since I am away in China now so it would be unfair for me to comment further.”

Liu had said a day after the incident that he was upset with the council officers’ actions and threatened that they would face stiff action.

Meanwhile Human Resources Minister Datuk S. Subramaniam said the MIC was extremely disappointed with the state government and MPAJ for allowing the demolition to occur.

“If a temple needs to be relocated due to road expansion or some major development, it can be relocated with the agreement that a new place of worship be built,” he said.

MIC president Datuk Seri S. Samy Vellu has also condemned the demolition, saying that it went against the Opposition’s promise during the last general election not to demolish any temple.

“It is very uncaring of the local council to demolish the temple without first relocating it,” he said."

this is a article i found in STAR news paper today.

the reason i put it here just to sjow that PR govn already inform that any worship place shouldn't demolish without proper procedures and action.

so here those whoa againts the order were the officer who appointed by BN. one must understan that only govn can change and not the gov officers. so most of the officer in PR rulling state were BN appointed officer. so the possiblities those officer support BN are there. why not just to spoil PR image they have done it???

NO ONE IS BLAMING THE PAKATAN RAKYAT FOR IT. INDIANS ARE RATIONAL PEOPLE. MIC IS THE ONLY ONE BARKING ABOUT IT LIKE A DOG. DOG WILL ALWAYS BE A DOG......

I HAVE JUST RECEIVED NEWS. SAMY VELU INSTRUCTED THE MPAJ TO DO IT AND TO BLAME IT ON PAKATAN RAKYAT. SPIT ON SAMY VELU

SAMY VELU AND MIC DEMOLISHED THE TEMPLE. IT WAS PREPLANNED BY MIC.
WE SUPPORT PAKATAN RAKYAT. DON;T WORRY PR. WE ARE NOT IDIOTS. WE KNOW WHO SPEAKS THE TRUTH

MIC IS ONLY WORTH BLAMING OTHERS. TALK THE TALK. PAKATAN RAKYAT RELIES ON PEOPLE'S SUPPORT. WE SAY PR RULES. WE WILL BE WITH THEM DURING TOUGH TIME AS WELL. THE MESS WAS CREATED BY MIC

I agree. it was mic who created the mess.

i just got to know about it. An MIC man involved in this scam. Better come out before we publish your name. samy velu funded this despicable act

why samy velu is doing all this. he will create havocs and make the indians fights among them. he is a real gabbage for the community. Let's demolish that idiot first. His sins are too much to bear. He lived like a king and will die like a dog

I am the National Assistant Secretary of MIC Youth, a wing of the Malaysian Indian Congress. I am a telecommunication engineer by qualification. Currently working in a multinational telecom equipment manufacturer, in a regional technical sales role.
I come from a close knit family, parents who have provided more than enough for me, and one lovely sister. My parents brought me up with all the comforts of live in KL, yet always reminded me of the trials and tests they had to put up with in their growing years.
Perhaps it is this reminder, and the knowledge that many in my community, in my country, are still having to undergo the same trials, tests and hardship that has led me into politics. While I may not be able to change it all, I promise to do my part in being that change.